The global macro markets are truly facing the first Black Swan event we’ve seen in over a decade, with agricultural markets not immune to the volatility. The situation is changing rapidly, but to summarise the various impacts we’re seeing in our domestic market:

A bit of backstory:

Before the Coronavirus was barely making headlines outside of China, it became apparent through monitoring the shipping pace that our wheat was flying out the door. The market domestically didn’t take much notice, with healthy doses of grower selling keeping both consumers and exporters well supplied. This coincided with the deluge of rainfall we’ve seen in parts of NSW/QLD (hallelujah!) which crippled prices (barley in particular) and bought more grower selling to the market. So our prices chopped along sideways to lower, while exports continued to sail offshore at a hearty pace. As illustrated in the chart below, of the ~8.5Mt of exportable surplus we had this season, 75% of this will have left our shores by the end of April – which is a long way from when new crop comes online. This is by far a record (as a %) going back 20 years, further emphasising how busy our exporters have been. Again, this data has been largely available to the public and our market responded with general lacklustre. The domestic consumer especially was buying hand-to-mouth, with little to no cover on from May/June onwards.

However, the Coronavirus and the Black Swan it has become, has thrust this into the limelight. As global wheat markets started rising, and our currency plummeted, it gave our prices a strong platform from which to rally. Even with higher prices, exporters were busy buying up wheat against sales, flour millers were in the market buying up supplies to meet the burgeoning flour demand from consumers cleaning out the supermarket shelves. End-users realised they were on the wrong foot and the market rallied aggressively away from them. The role of the domestic consumer is to secure their requirements by being the best price for the amount of grain they need. In big production years, that may only require being the best priced home for grain within a few hundred kilometres, in tight years it might mean paying such a premium that you’re dragging it all the way from WA (as is the case for QLD consumers). All of a sudden, the export market could pay much higher prices (on account of rallying global prices & weak AUD), which has become a hard pill to swallow for our domestic consumptive buyers. 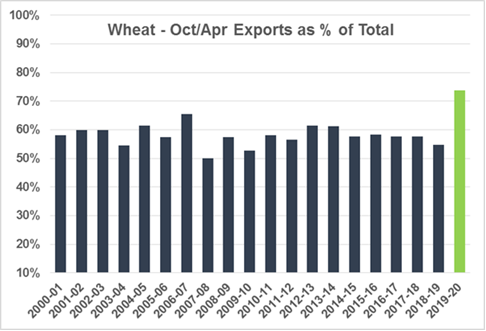 This has led to speculation around whether Australia will have ‘enough’ available stock to fulfil its domestic requirements. Rumours are rife about calls being made asking for government intervention to ensure exports are kept at a level that would keep enough supply here. The short answer is this is probably more rumour than fact, the chance of government intervention is very small (especially after allowing imports over the last 18 months!) and of course we have enough stock. The consumers just need to pay over what the export market is willing to, in order to make sure applicable volume that hits the market ends up in their hands, rather than getting loaded onto a boat. All of this speculation culminated this week, with a fairly historic development that has largely gone unnoticed. Both CBH (monopoly bulk handler in WA) and Viterra (pretty much a monopoly in bulk handling in SA) have released their current stock levels, giving the market a rare glimpse into exactly what is sitting in the bins for the remainder of the season. To quote CBH on why they are now reporting, “there is an understandable heightened concern in our domestic industry regarding the availability of grain as we go through the COVID-19 crisis. During this unprecedented time CBH wants to make grain stocks transparent at a high level, given public, industry and Government concerns.”

This is a strategic move by the bulk handlers to get in front of mounting concern and show they are providing maximum transparency/flexibility during this time and IF down the track we get closer to government intervention, allow them a stronger footing having been proactive in giving the market the necessary stocks data they want. In our view, the pace was always going to be a concern, even before Coronavirus and this has just bought it to the forefront earlier than anticipated. So, our deregulated market is in uncharted waters, with the situation likely to fully manifest itself when stocks are naturally at their tightest through July to October. The likely outcome is that the domestic market will need to do a better job in elevating our relative value in order to capture the remaining supply before more of it heads into the export pathway. However it pans out, it is sure to be a very interesting few months ahead.