The Australian barley market took shot after shot last year, starting with China’s announcement they would implement a prohibitive tariff on the feed grain following an anti-dumping investigation against Australia. This was compounded by the fantastic turnaround in production last year, with Australia growing approx. 13 Mt, while the AUD has been on the war path higher since the March-20 sell off.  As we moved into harvest, feed barley prices sunk to the lows of $205/t port in VIC/SA, $208/t in NSW and $245/t FIS in WA. Prices have since seen a surge of nearly $30/t depending on location. This is due in part to the lack of seller engagement, stronger than expected nearby export pace and a rally in global feed grain prices driven by the tightening global corn stocks. It is largely a Corn Story

The USDA recently reported global corn ending stocks as a percent of global demand at 25% this week (also known as the stocks-to-use ratio, the lower the more supportive prices) which is down from 29% last May and nearly 33% in 2017. Even more friendly corn prices are the extremely tight stocks-to-use ratio in the major exporting countries, which USDA pegged at 10.6% which is down nearly 50% in under a year. Interior Chinese corn prices have also spiked as their pig herd recovered and the long-held corn stockpile inventories were chewed up or never existed. China is on track to become the largest corn importer in the world with the US being a big benefactor. The only problem is that the US has its own corn stocks issues and hence we seen the explosive move higher in global corn prices Australian barley is the cheapest feed grain in the world at around US$218 Free On Board (FOB) and is working its way into traditional corn markets given the wide spread its now at to corn prices. This would help bring more demand to the barley market at a time when we are in the pole position to benefit. Barley Demand Is There

Global barley ending stocks for the 2020/21 season are pegged at around 20 Mt, these stocks as a percent of total demand sit at 13% and have been hovering around this level since 2017. Saudi is the biggest export market, making up 45% (or ~12Mt) of total exports which is more than enough to help Australia clear some of the exportable surplus. But the question is how much export capacity will be allocated to barley over wheat and canola given there is limited capacity at port and logistical constraints upcountry. There is 2.8 Mt of barley nominated on the bulk export shipping stem as of this week, the destination on 1.5 Mt has not been nominated but will likely be shipped (and not swapped to wheat or canola) given the price spreads to alternative origins. Saudi Arabia is the top destination followed by the UAE at 253,000mt then Japan at 172,000. Countries such as Thailand, Indonesia, Qatar, Oman are also in for a few vessels and we should see more traditional “feed grain” importers show up on the stem in coming weeks as Australian feed barley prices itself into new destinations. 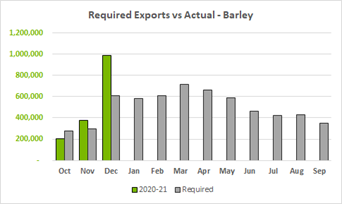 Barley exports will be the strongest from the exporting states of SA and WA, but VIC should also export over 500,000mt given the exportable surplus in this state. The barley discount to wheat which currently sits at -$55/t in Port Kembla will see strong domestic demand throughout QLD, NSW and VIC. We need to keep in mind that barley prices have done some work over the past month and will continue to face headwinds with forecasted carry out stocks in Australia at around 3.5 Mt this season, so some cash sales are warranted. The volatility in the AUD could also place downward pressure on prices as we need to remain export competitive. Market Check’s Strategic Barley Program is managing currency risk for participants this year via the use of AUD/USD call options which so far have been working well and is an option for growers. But it is also fair to say that higher corn prices combined with the strong demand from China will play a big role in supporting global feed grains, especially those that are the cheapest into the export pathway if capacity is available.