Records Are Made to be Broken (Apr-21)

The export task underway around Australia is unlike anything we’ve seen in the past. Every cog in the export wheel is under strain, with ports pushing out as much as possible, while available trucks and trains are a scarce commodity. Despite the challenges, the job is getting done, especially when export margins are at or near record levels. According to the ABS, wheat exports for February were a record, with Australia pumping out just over 2.68Mt and beating the previous record set in May-17 by ~100kt. For perspective, the average monthly wheat exports last season were a shade over 750kt.
Export volume records tumbling is little surprise given the enormity of the crop produced in 2020. It becomes even less surprising considering the progression in supply chains over the years to deal with bigger volumes, plus the increased adoption of mobile ship loaders to add export capacity. It is important exporters can push as much of the crop out the door, as quickly as possible. Australian wheat has at various times in the past 6 months been the cheapest globally, attracting demand from importers who we haven’t heard from in years. We have done a great job of maximising our opportunities to execute our abundant exportable surplus, as we take advantage of the Northern Hemisphere exporters winding down as their stock dwindles ahead of the new crop harvest around June. The approaching Northern Hemisphere harvest means our reign of competitiveness into far reaching destinations is coming to an end, as the inverse in the current old and new crop prices offshore converges. The inverse can be illustrated by the Platts Black Sea FOB Wheat market, which shows there is still a premium for April and May (old crop) contracts vs the July-21 (new crop) contract. Therefore, whilst we are successfully competing now, in a few months’ time, we’ll be going up against cheaper Northern Hemisphere new crop. 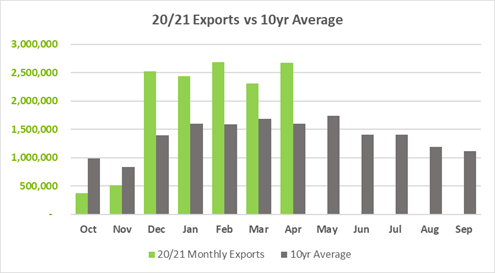 Our ability to execute as much volume before July is crucial in reducing our exportable surplus having to compete against the Northern Hemisphere exporters. If we keep up the current pace, by the end of June, we’ll have executed ~85% of our program, which will leave just over 3.5Mt to be executed in the July-Sept slot. If we take out our inelastic demand of ~1.5Mt for this period, leaves around 2Mt of price sensitive demand we need to capture. The good news is if we convert our domestic prices in July to Free On Board (FOB) and add the freight to South East Asia, and compare this to new crop Russian, we are more or less on par and hence should capture the demand we need. However, those calculations don’t include any export margins, so will require exporters (mostly the big bulk handlers) to forego the export margin to keep up the utilisation of their assets or discount the domestic market to create the margin. Which way it ends up going is yet to be seen, but the volume will leave our shores one way or another.