China’s Wheat Demand To Surge in 2020

In 2001, China implemented a policy to allow the importation of a set volume of wheat each year as part of its accession into the WTO. These Tariff Rate Quotas, or TRQs, have reached an annual volume of 9.6mmt in a bid to open China up to the wold wheat market. In 2006, a new agricultural policy was implemented by the Chinese government to support prices for domestic wheat producers called Minimum Support Prices (MSP). As the global market for wheat prices fell in recent years the interior wheat price in china remained high and government stockpiles grew. The importing margin for wheat in China also became very attractive for those importers who were issued TRQs from the government. As the government stockpiles grew and their appetite for imported wheat shrunk, the government issued a larger percent of the TRQs (import quotas) to state-owned importing companies. The state-owned importers then underutilised the TRQs in a bid to stem the flow of wheat imports. Based on USDA data, since 2001 wheat imports into China have only peaked above 4mmt three times with the average annual import number for wheat being between 1-3mmt.

In April 2018, a dispute was submitted by the US regarding the underutilisation of the TRQs by China. The US stated in the submission that “even if successful in obtaining a TRQ allocation, China’s measures subject recipients to requirements and penalties that limit their ability to fully utilize their TRQ allocations, particularly for the state trading portion of each TRQ.”  The dispute has obviously spurred some buying with China reported to have purchased over 1mmt of Australian wheat for the 2019/20 season alone with more purchases of French and Canadian wheat on the books. 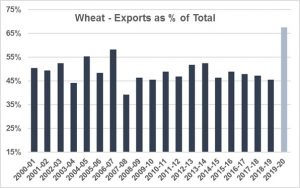 There is now speculation that China will utilise a larger percent of their TRQs in 2020, which if true, could push demand up for global wheat by 4-6mmt. The world wheat balance sheet will struggle to fill this extra demand as China typically buys US, Canadian, French and Australian wheat only. The Australian wheat export stem has already confirmed well above average export pace supported by sales to China. Our wheat balance sheet is already tight which will limit our ability to sell any more wheat to China if they come for more. The VIC export stem and wheat balance sheet needs to be watched closely as demand for +12% protein wheat in containers is ramping up. If China do come for more Australian wheat this year, WA & SA are running on fumes so VIC could be the next to pop – watch this space.

Chart of MATIF & ICE Nov-21 canola (in AUD/t) - been on a hell of a run. High prices breeds high volatility though as the $A/t Swap fell ~$100/t in about 6 days to finish last week. Not a market to be complacent in! #canola #oatt #plant21 pic.twitter.com/O7uLgxzkhW

Market Check and @boyceca teamed up and recorded a 35min webinar which offers a grain market outlook and tax implications for grains growers in 2021. Click the link below to access the recording. #GrainMarketing #accounting #agriculture #farming #wheat marketcheck.com.au/events/ pic.twitter.com/WOIUVS4H1d

@MarketCheck1 & @boyceca are co-running a seminar in Griffith at 6pm on Tue 18th & Cootamundra at 6pm on Wed 19th May including a grain market outlook and tax implications for grain growers. For more info or to register follow the link below. bit.ly/3nLom19 pic.twitter.com/NBG3hZAYUd

The export task underway around Australia is unlike anything we’ve seen in the past. Every cog in the export wheel is under strain, with ports pushing out as much #wheat as possible. Read more from @CrundallNick in the below article #oatt #agchat marketcheck.com.au/mc_news/re…